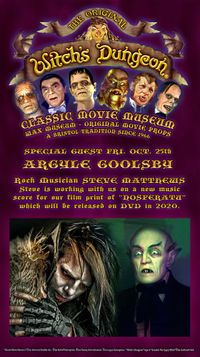 Photo ops, merchandise, and signings will be available as well as tours of the museum. visit www.preservehollywood.org for more info.

The historic Witch's Dungeon opened in Bristol, Connecticut in 1966 as a tribute to the actors & effects artists who have given us a legacy of classic fantasy films. The Witch's Dungeon features highly accurate life size figures based on the classic films of Lon Chaney, Boris Karloff, Bela Lugosi, Vincent Price and others from the golden age of horror & sci-fi cinema- all created and assembled by Cortlandt Hull, nephew of Henry Hull- (aka- Universal's Werewolf of London). The museum is considered the longest running exhibit of its kind in the country.